The team’s mission is to push the limits with each edition, and that’s what we did for the tenth JACKALOPE festival in Montreal. To cook and serve such a delicious event, you need several ingredients: a lot of planning, and the great energy of the festival goers, athletes and partners. We had all that this year. The main ingredient was the very high quality and quantity of action sports athletes present at the Olympic Stadium this year.

After 2 years of absence, we finally found the unique atmosphere that makes the magic of JACKALOPE.

The first two days were the occasion of so many strong moments to culminate on Sunday with equally intense moments despite the storm to present the finals in several disciplines. We even broke the record for the number of people who had lost their voices from screaming. Podiums, MVP, heroes of a day, evacuation of the site for storm, general mobilization to dry the grounds, to live or relive the festival, it is below!

The 2022 skatepark will have been the scene of a solid show with the long rails, the glasses-bank and the perilous edge of the container. It was Ben Paterson who took first place and he abused the long rails with, for example, a well-maintained backside lipslide kickflip. This Torontonian has the talent to compete with the top pros and it is by improvising a few tricks as much in switch as in regular among his immense baggage of tricks that he got the win. Joe Hinson did not give him a chance with great consistency and perfectly landed 360flip lipslides, he almost won. However, he couldn’t get a score that could beat Paterson’s due to his ability to ride switch. Richard Tury did well again this year with heelflip front lipslides and other tricks he never misses, and that earned him third place.

Before we go to the women and under 13 winners lets say a quick word about the best trick. The skate started strong on Friday night with the best tricks pro and the best tricks open. It’s always one of the most spectacular moments because the athletes are fresh in and everyone arrives with a knife between their teeth. Raph Detienne was that guy on Friday night and he stood out as MVP which will have earned him $500. He skated well on every obstacle, made a large number of variations on the famous sunglasses among them was a huge transfer and his consistency led him to stand out from the crowd. Special mention to our famous guests such as Felipe Nunez, Gavin Bottger and Andy Anderson who gave a great show to everyone.

For this anniversary edition, we attended a new and unusual event: Skateboarding game in the parking lots. The storms invited themselves in the finals, and not only a little: we had the order to evacuate festival-goers and athletes in the underground parking lots of the Olympic Park. But as Todd Richards said in the live ”you can’t stop the energy of these guys”: the proof in images.

The next day, the women have once again raised the bar as every year. The evolution of the women’s competition at JACKALOPE over the last 10 years is immense. It is the Mexican Itzel Granados who took the highest step of the podium. The Europeans Keet Oldenbeuving and Lore Bruggeman took second and third place. With a huge heartbreak, the women’s final had to be cancelled due to the weather. The women gave an inspiring performance but also showed more solidarity and sportsmanship than all the medals put together. Special mention to Annie Guglia, local ambassador and friend of all, who ran the course in a thunderstorm during Sunday’s final. A memorable run that closed the festival. 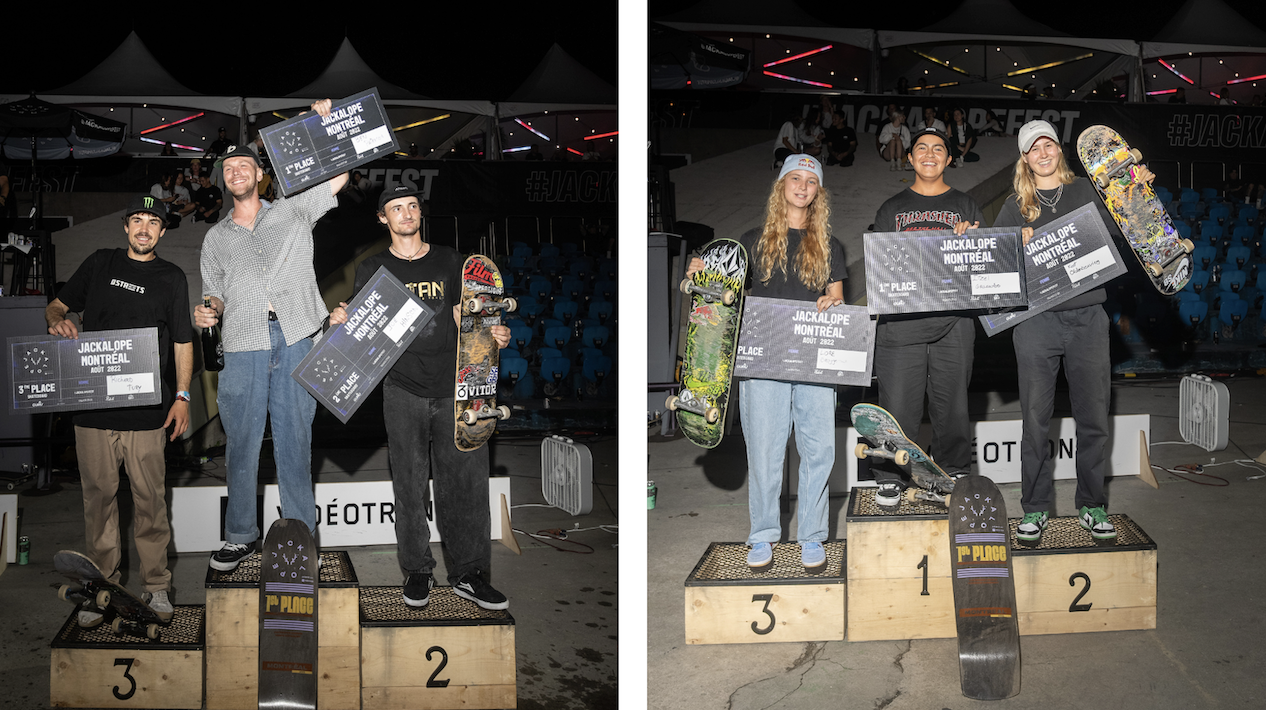 In the under 13’s, we saw an amazing progression and the crowd was loud to cheer on the up-and-comers. The groms have reached that level where the show they put on is not just cute but also impressive. While they all have amazing courage and determination, their talent is becoming more and more evident. It’s great to see them honing their competitive skills at the JACKALOPE because we know that in a few years, one of them may be the grand champion. Among them, Oli Courchesne in the first row, Hansen Foley Mengistu in second and Joaquim Costa in third.

For the semi-final it’s here.

We promised you a great, solid and serious bouldering competition this year. The wall was complex and we were treated to some spectacular moves like those of Sophie Buitendyk in the final or by the champion on his very last ascent. For Antoine from Allez up, who organized the competition, one of the highlights of the weekend was the way the final was saved in extremis. After the big storm that came at the time of the finals, it is not only thanks to the athletes and the organizers that the final could take place, but also to all the volunteers and spectators. The involvement of dozens of people made it possible to save the finals because of the soggy state of the cushions. You had to be there to see the strength of a group working together. Within moments, everything was dry, ready for the final and it lived up to expectations. It was Alannah Yip on the women’s side who won another title. Charles Barron showed his consistency and put on quite a show to reach his final top. Special mention to Babette Roy, the only local representative among the top finalists. 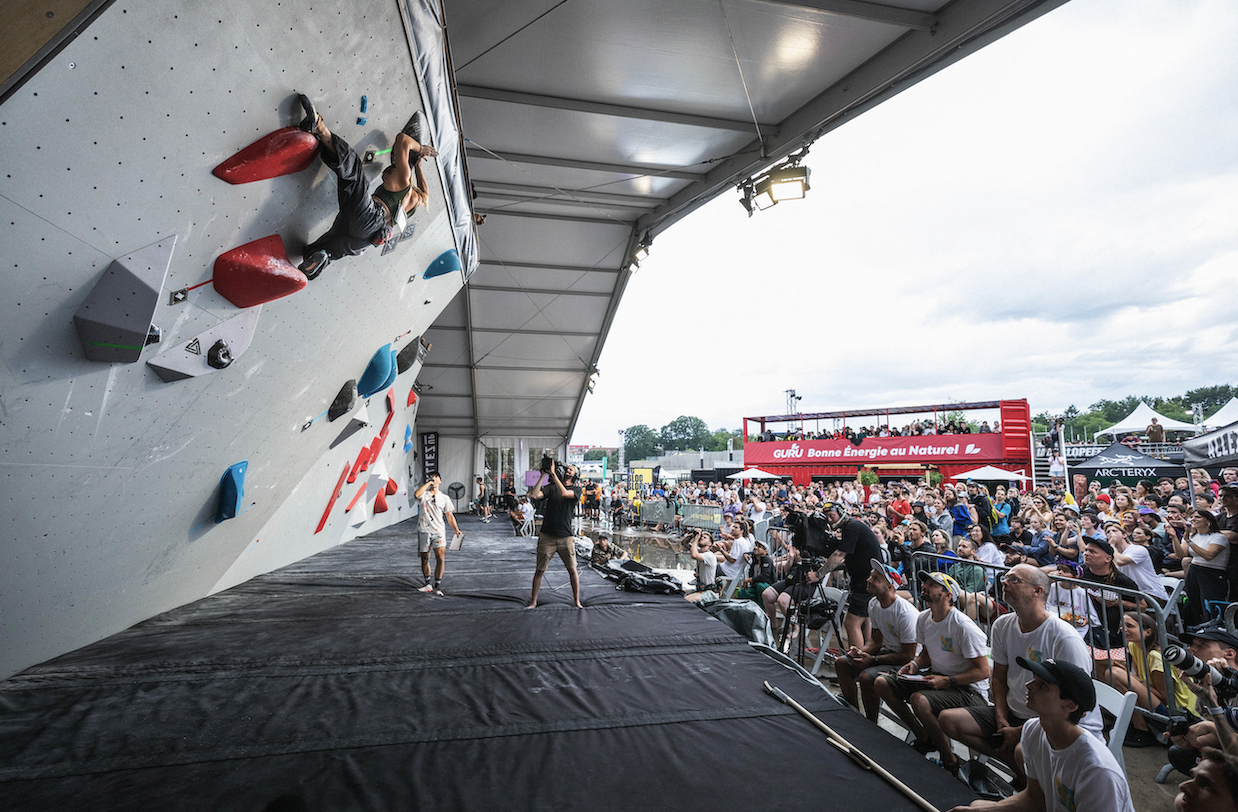 Catch the finale here if you missed it.

3-BASE Jump: Records and festival-goers getting their kicks

Lots of new things this year for the BASE Jump which represented a great challenge for the production team, but the result was worth it! The Olympic Stadium tower, the usual playground for BASE Jump athletes, was closed for renovations, so we had a crane installed on Sherbrooke Street, no less. Observers will have recognized the crane we used in the episode of “la Grue des Roy”.

For the first time in Canada, we offered festival-goers the opportunity to do tandem jumps, and get high in the air with none other than Andy Lewis, one of the greatest pioneers of BASE jumping.

His arrival will have been an opportunity to break records: first tandem jump in Canada, first tandem jump from a crane, the most tandem jumps in one day with 10 jumps in 1 day (it was necessary for our 10 years). And if you saw the rest of the band jump from the crane, it is because in total there will have been 125 jumps during the weekend, all without incident. Since competition is above all a pretext for jumpers to soar into the void, the whole community was happy to see Bertrand Cloutier take second place. He is the dean of the local community and a man with contagious energy as we rarely come across.

To listen to Andy Lewis talk about his exploits of the weekend, it’s here.

For its first year at JACKALOPE, the breaking competition did not go unnoticed. We were treated to the elite of dancers and for the public it was an exciting discovery judging by the crowd that was constantly present during the performances. We saw them moving/dancing/breaking all weekend and for the following reason: there was a national competition and it was Anthony “illz” Put and Tiffany “Tiff” Leung who won the honors in their respective categories. “Mark doc_mon2_uff” Collantes was the MVP and also won third place. Big up to all the breakers, it was an honor to have you with us to celebrate our 10th anniversary and we’re counting on you next time because the party isn’t over. 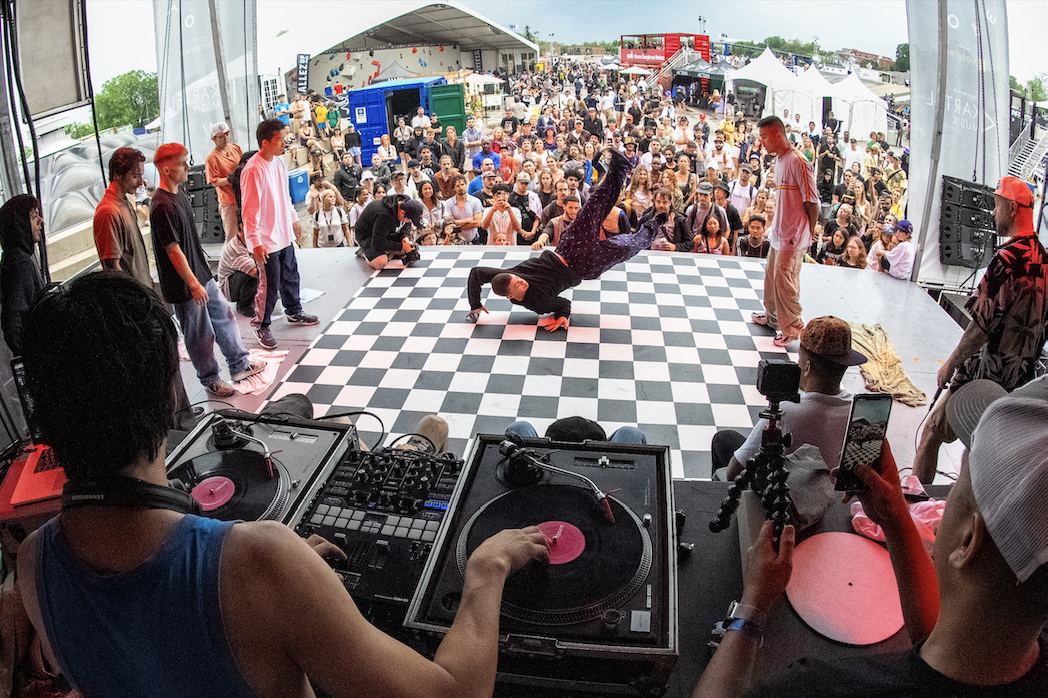 5- When JACKALOPE does his show

Like every year, there is no shortage of things to see at JACKALOPE. The BMX and FMX demonstrations did not go unnoticed. The height that Christian Martinez and company can reach with a motorcycle leaves no one indifferent. Speaking of soaring high, many of you got into the vibe of the artists for the Saturday show with Tizzo, Naya Ali and Gros Big. Saturday could not have been more intense. 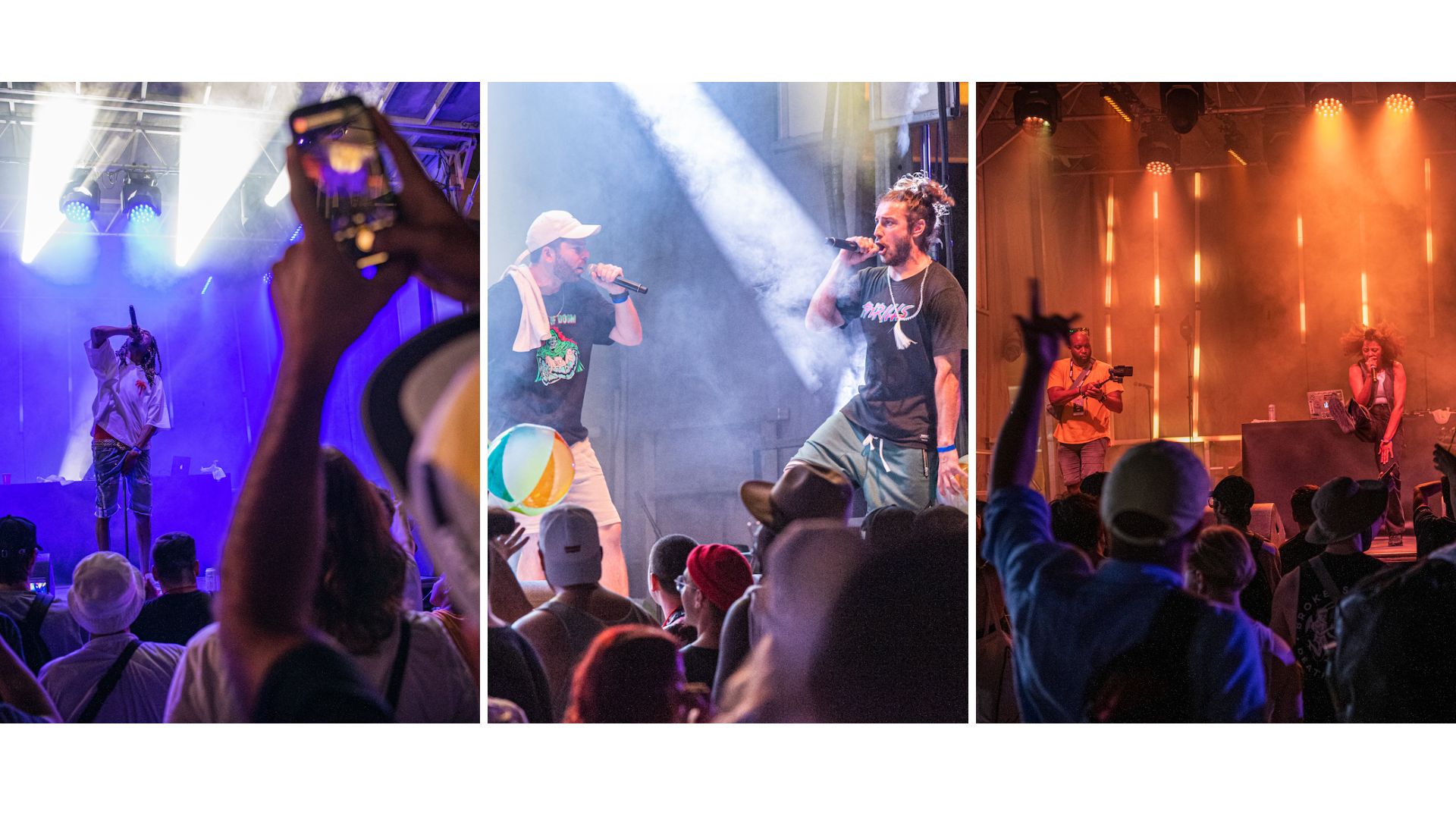 For skate enthusiasts, if the great Tony Hawk was not there, we were still treated to the cream of vert skaters. Don’t tell him but, they are as good if not better than Hawk right now so we were delighted to see them go! Elliot Sloan, Reese Nelson, Jimmy Wilkins delivered a whole show with maneuvers that we only see during the biggest competitions. Special mention to when Jimmy Wilkins jumped over Reese Nelson who made a blunt to fakie as well as to our favorite locals Julien Lacroix and Phil Dulude who also landed a double. Virginia Beach skate ambassador Collin Graham also surprised the local crowd with a his professional level. It promises for the demo in his local city!

Rewatch the Saturday show with PL Gagnon as a guest.

In conclusion, it is thanks to all the festival-goers, the 27 pop-up shops, the 9 food trucks, the athletes and the musicians who raised the 3 completely crazy after parties that this year will remain memorable. THANK YOU, we work hard to live these moments with you, and we can’t wait to do it again next year. In the meantime, we’re going to have fun with the Virginia Beach gang who are going to experience their first JACKALOPE…feet in the sand! An edition that will be free, you just have to book your road trip so you don’t miss it.

Shop at the online boutique to get an exclusive souvenir from the 2022 edition.

And in closing, if you missed any bits, here is the link for the live stream and the festival recap here:

The Swatch Pro Team is in the house!
Read this Article now
Previous Article Next Article